The old DeSoto made it fine to Piedmont, where John left his daughters with Lily Polk.  It was fifty miles on down the highway from there when the soft punk of an explosion sent clouds of steam streaming out from under the car's big white hood.  John pulled over onto the grassy shoulder of the lonely two-lane.  It was flat, piney country. He was still a good hundred miles from Dallas.  After a time he was able to lift the hood, releasing a billow of steam and he could see the damage that had been done; relieved to find that the replaced water pump didn't appear to be the cause of the malfunction.
He felt a presence near him and lifted his head from under the hood.  There was a raggedy pick-up truck pulled up behind the DeSoto with three dogs in the bed.  They began to bark when they spied John.  An old man with shaggy hair and beard sat behind the wheel, watching John through the windshield.  He made no move to get out of the truck.  He tapped his knuckles on the back glass and the dogs grew silent.  John walked back to where he sat.
"Hello there, sir," said John.
"Troubles?" asked the man.
"I think it's just a busted heater hose.  I pro'bly can fix it with some tape I got in the trunk.  But I need some water to refill my radiator."
The old man flung the door open and climbed out of the truck.  The dogs jumped down and followed him over to the DeSoto, giving John a good sniffing on the way.  His clothes were as dirty and raggedy as the pick-up truck.  He stuck his head under the hood to look things over for himself.
"It's right there," said John, pointing to the tear in the hose.  "See it?"   Up close, the old man stank strongly of sweat, dogs and cigarettes.
"My place is down the road a piece," said the man.  "Let's tape her up an' I'll take you there an' git you some water."   As he turned to face him, John was shocked to see that the man wasn't old at all, maybe in his late thirties.   His filthy condition made him appear old, his hair matted and tangled, the lines of his smudged face caked with dirt.
"I'd be much obliged," said John.
The old truck rattled along the highway at about fifteen miles an hour, the dogs roaming the bed of the truck.  The man was in no hurry.  He lit up a hand-rolled cigarette and offered one to John.
"No, thanks," said John.  "My name's John Aubrey," he said, offering the man his hand.
"Cyril Rodgers," said the man.
"I'm mighty grateful to you for stoppin'.  An' to the good Lord for sendin' you my way."
Cyril turned toward John, his eyes wide with mock surprise.  "The good Lord sent me?  You mean it was the Devil who busted your radiator hose?  Or was it the good Lord?"  John was surprised into silence. "I believe it was the Lord," said Cyril.  "He's always up to some mischief.  I wonder why He done it."  John couldn't think of a thing to say.  Cyril laughed at him.  "Where you headed?" he asked. "Dallas."
"You a preacher, ain't you?"
John's eyebrows shot up.  "How'd you know?"
"Soft hands, pasty skin; fancy clothes, but drivin' a beat-up ol' car ....  What you goin' to Dallas for?"
"I'm speakin' to a conference of pastors."
Cyril took a long draw on his cigarette.  "Would that be the one put on by the Reverend Harris T. Black?"
"My God, who are you?" John blurted out.
Cyril looked him over curiously.  "Maybe I'm an angel from heaven," he said.  He burst out with ragged laughter at the look on John's face.  "You been visited by angels before, ain't you, Brother Aubrey?"  He laughed again.  Sucked on his cigarette.  "I was a preacher once," he said.
"What happened to you?" asked John.  Cyril exploded into laughter again, bent against the steering wheel, bangin' his fingers on the dashboard.  The dogs in back started barking and he rapped on the back glass to quiet them.  "I'm sorry," said John.  Cyril's laughter turned into a coughing fit.  John kept a wary eye on the road as the truck weaved across the center stripes.  Cyril pulled it back in line.
"What happened to me?" said Cyril.
"Did you lose your faith?"
"No," said Cyril.  "I found it."
"I don't understan'."
"No, you don't.  You a preacher.  You live by words.  Words never tell the truth, Brother Aubrey.  God’s too vast to fit into anybody’s mouth ... or their ears."  And, as if to emphasis his point, he clamped his mouth down tight.  The truck rattled along for a ways.  John searched uneasily the piney roadsides for the sight of a house or a storefront.  Nothing but thick woods beyond the littered, overgrown shoulders.   Cyril spoke again.   "When I quit preachin', I started listenin'.  When I started listenin' all the words dried up in me.  I stood mute before the Lord."  He stared at John, stomped down the clutch, the engine sputtering, the truck slowing down. 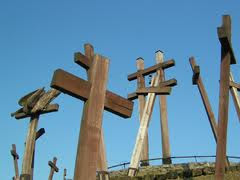 He turned onto a dirt trail that led deep into the piney wood.  John was startled to see three crosses of rough timber stuck up in a clearing to his left.   The two lesser crosses were raw wood, but the center cross was painted red and bore a Bible verse in white paint: Eli, Eli, la-ma sa-bach-tha-ni?
"My God, My God.  Why hast thou forsaken me?" quoted John.
"Yes!" said Cyril.
There was another cross coming up on John's right made of pine logs, tied at the crux with rope.  Three more on his left, white, painted with verses.  And then the old truck turned a corner of thick pines and there stood before John hundreds of crosses, clustered in random ways, various sizes and colors.   They stood in front of, and to the side of a one room shack, the exterior walls of which were covered with roofing shingles of many different colors.  The roof itself was corrugated tin, rusted a dark brown.  Smoke rose from a stack jutting through it.  Cyril cut off the truck motor.  John sat gaping at the crosses.
"I don't preach no more," said Cyril, quietly.  "I make crosses."
"It's wonderful," said John.
"It's the Lord's work," said Cyril, as if he expected a challenge from John.
"'Course it is," said John.  "Can I look aroun'?"
"He’p yourself," said Cyril, his manner withdrawn and apprehensive.  "I'll fetch a couple of pails of water."
John wandered among the crosses; in the shadows of crosses, many of them full scale, some the size of grave markers, all stuck in the weedy, hard, dry scrabble of central Texas.  The dogs walked leisurely along side him.  Some of the crosses had scripture carved or painted on them.

For I was hungered and ye gave me meat.

Watch therefore, for ye know neither
the day nor the hour
wherein the Son of man cometh.
And many false prophets shall rise. 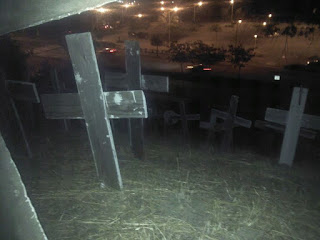 Cyril came back with two buckets of water.  They rode back to the DeSoto in silence.  Cyril seemed chary of discussing the crosses.  John was overcome.  No words came to mind.  What the man did was somehow self-explanatory.  John felt the presence of God on that patch of land, inside that old dog-smelly pick-up truck, hidden within the dirty, ragged covering of Cyril Rodgers' soul.
They filled up the DeSoto's radiator with water.  When John cranked the motor, the tape held.  He shook Cyril's hand, parting there on the shoulder of the highway.  Thanked him once again.  Cyril loaded his dogs back into the truck, was preparing to climb in himself when he turned a last time toward John.
"What happened to me, Brother Aubrey," he shouted above the noise of the two idling motors, "was God put out His great big ol' thumb an' He squashed me with it.  I'm under the thumb of God, Brother Aubrey.  That's all I'm tellin'."  He climbed into his truck and drove away.