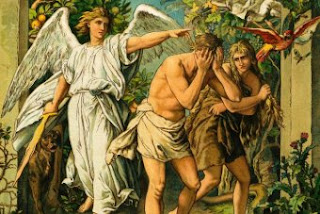 Perfect is the poem until the book is cracked,
meaning and structure imposed from without;

eyes taken off even for a moment

and it returns to its original

aptness and utility, it doesn’t mean a thing.
But seized and probed, quoted and exploited,

read assiduously between the lines,
its perfection is seemingly destroyed

by the critical reader’s inherent
self-serving fantasy, leaving it to rot

like carelessly bitten fruit tossed aside
in the original garden state of non-attachment.

O child of God, you are also
the apple-cheeked son of Adam and Eve.
Posted by Brian Darnell at 8:58:00 AM